Andiamo-A Ranger 29 Tug
INTRODUCTION: Every year there are a couple of hundred boaters who finish the "Great Loop."  Most boaters, like us,who are from the west coast often have no idea what this adventure is.  Simply and on a high-level, it is an inland waterway adventure that goes up the intracoastal waterway along the east coast through small towns and full-sized cities with easy side trips to New York City and Washington DC, up either the Erie Canal or through Lake Champlain, connects to the Great Lakes and all the opportunities in Canada, and goes down the rivers to the Gulf of Mexico.  There is only a couple of short segments that in either the Atlantic Ocean or the Gulf of Mexico.

It is a loop and can be started anywhere along it and nearly everyone goes counter-clockwise.  Get out a map of the United States and start in Tarpon Springs on the west coast of Florida where we started our trip.  Now follow the edge of Florida around the Keys, up the east coast along the Intercoastal waters past Georgia, the Carolinas, Chesapeake Bay and Washington DC, up through the Hudson River by New York City, to the Great Lakes and Canada’s Georgian bay and North Channel, down through Chicago to the Mississippi and then Tennessee Rivers, and ending in Mobile, Alabama.

The trip can be done in a few months or years.  Loopers typically follow the thermometer, heading north when it is 70 degrees and heading south when the mid-80's hit.  Loopers are in Chesapeake Bay in May and enter the Erie Canal after June 1 and leave Lake Michigan in early September.  Hurricane season is avoided.

These 6,000 miles of waterways are a trip of a lifetime and have been a dream of ours for years.  Some of you remember when we did part of this in the fall of 2008 on our 25 foot boat, Laurie Ann.  See our website, www.laurieann-ranger25.com to see the log and photos of that adventure.

Most "loopers" as they are known, are united by joining the American Great Loop Cruisers Association or AGLCA.  They are identified by the distinctive while burgee with the association's letters and the gold burgee that marks those who have completed the loop.  What surprised us about this adventure was how social it was.  Nearly every marina we stopped in we were greeted at the dock by fellow loopers who immediately invited us to "docktails" at 5PM and bring along your charts to share stories, the places to see and to create friendships that would renew every time you saw them along the way.

PREPARATION:   In 2012, we decided to move from dreaming into active discussions.  What are the obstacles?  Do we have the courage to just do it when nearly everyone is, at best, ambivalent or, worse, skeptical?  What about a boat?  Yes, we could do the trip in the Laurie Ann, our beloved Ranger 25, but what does a good Looper boat look like and could we afford it?  Are we ready to blow a lot of money for an experience and memories versus something concrete and lasting?  In early 2013, Laurie and I agreed to make it happen and the first concrete step taken was telling our employer, Public Safety Testing in March, that we were stepping out of this great job we had and were going to do an adventure.

We actively looked for boats in the spring and put our toe in the water on a couple of them.  We walked the docks, talked to brokers and spent a lot of time on Yachtworld.  There were emails and some phone calls.  Then, in May we found the Ranger 29 that we would buy and name Andiamo.  Then, all the stars lined up, making the deal and the sale of Laurie Ann so easy.  We started learning Andiamo and making those modifications that would make the experience as comfortable as possible.

At the fall tug rendezvous in Anacortes, Washington, we learned of the tug rendezvous at Palm Isle, Florida on February 5, 2014 and that became the pivot point, a date to plan for to start the Great Loop.  Though we had stopped the 2008 trip in Fairhope, Alabama, Laurie did not want to resume there and cross the waters of the “armpit of Florida.”  Rich Odendahl, Ranger 25 owner of "Roam" told us about Tarpon Springs which he was going to launch from and that became the destination for shipping the tug.

Rich connected me with Bruce, another Ranger 29 owner, who moors his tug at Tarpon Springs.  Bruce researched a boatyard, George’s Boat Repair, and that became the specific destination for the shipper.  The tug will be delivered and have a new bottom paint applied.  Then, after we cleaned it and made it sea-ready, we would head to the rendezvous at Palm Island Marina, about 100 miles south of Tarpon Springs.

We chose the trucker who moves the factory’s tugs as he came highly recommended and his mileage rates, $2.50 per mile, were the market’s norm.  Mid-October and Cory quickly responded to email and set the time aside on his calendar.  A plus, he had a trailer that was built for our hull.  He suggested shrink wrapping the boat because of the winter conditions.  Plans were made to have the tug floated onto his trailer, then the bottom would be pressure washed, and the Port of Everett would shrink wrap it.

By early December, we were in full swing of working the list, between an intense work schedule, the holidays, and celebrating that our son and his wife had moved up from Camp Pendleton in Southern California when his obligation with Marine Corps was concluded.  A crowning moment was buying the one-way flight from Seattle to Tampa for Sunday, January 26.

Leta’s Top Shop finished the canvas side curtains with mosquito netting for the cockpit that included a screen door for the cabin and a windshield screen, giving the sun and bug protection we wanted.  I made shelves in the mid-cabin berth for the new canvas and bought duffel bags for the rolled up side curtains.  AC outlets were added to the salon table as we would use those a lot.  The fold-down table in the master stateroom was removed and the teak was used to create a bookcase that could hold the field guides but also the large cruising guides and map books.

The interior of the tug was slightly modified to be more comfortable for two people because the words of advice from other Loopers rang in our ears:  Very few friends and family will actually join you.  Removed was the solid door to the master stateroom and this widened the hallway considerably.  Privacy comes with a curtain.  Also removed were the folding door and the hinged lid to the mid-cabin.  Privacy will be canvas-covered windows and door.

Simplicity and importance was the theme on deciding what to take and what to leave behind.  Yes, to the inflatable kayaks and the folding bicycles.  No, to the rigid hull inflatable dingy and the motor.  If we were wrong and needed a dingy, we would buy one there and row it.  Yes, to snorkeling and basic dive gear for John but no to the scuba tank.

A trip to Hat Island revealed that the tug's house batteries were shot.  Andrew Custis at the tug factory came through and used his connections with their supplier to offer a screaming a deal on four new ones.

Gear suited for the Pacific Northwest was removed and our clothing theme from a Europe trip was used: light, washable and enough for seven days.  Also, nearly everything had to be multi-purpose.  The fall back position was if we needed it, we could buy it because this was boating in the country and the city, not in the wilderness.

Our house and the way we conducted the business of living had to be adjusted.  The yard, the mail, the bills and all that stuff needed a new system.  By mid-January, nearly all of that was take care of.

Load day was January 21.  We were blessed with a great January weather, no rain and no snow.  Under low clouds and fog with temperatures in the mid-30's, the tug was moved to the boat ramp in Everett where Cory arrived with his custom triple axle trailer and a one-ton, Dodge, four-wheel drive, dually pickup.

Cory checked out our preparations for travel and those were: all canvas and framing removed, anchor off, antennas zip tied down, water drained and 5 gallons of RV anti-freeze circulated through all the cold and hot hoses, faucets and pumps (pressure, shower and bilge), propane off at the tank, batteries off, everything off the shelves, and fenders and lines stowed.  He found one over-sight: removing the light fixture over the salon table. Those have been known to break and shatter.

The tug was floated on the trailer, placement adjusted for weight distribution, and then taken to the Port of Everett for a pressure wash.  Rules about invasive species prohibit the moving of dirty bottom boats.

Another example of serendipity with this adventure:  Larry, the Port of Everett supervisor who was going to oversee the shrink wrapping and Cory knew each other.  They had a productive conversation that resulted in good ideas and clear understandings. Then, the tug was taken inside to be dried off and prepped for shrink wrap. There are opposing views on shrink wrapping.  One side says it will protect the boat from sand and dirt that can affect the parts that move and slide and it makes for easy cleanup. The other side says that a damaged wrap will flap and cause real damage to the gel coat.  How did we decide? Both, Howard who manages the Ranger 29 factory and Cory who delivers them enthusiastically advocated shrink wrapping.

How is shrink wrapping done: the boat must be completely dry for the tape to adhere adequately. Cleats and all sharp edges are padded, then 40 foot long, 7mm plastic is draped over the tug and cut so the edges comes to the boot stripe on the hull, Then it is taped down.  The plastic is heated with propane flame that is shaped like a fan from the top down and it shrinks tight-like a drum.  Holes and tears are easily repaired by heating on additional layers of plastic. Andiamo was done in about 3 hours at a cost of $500. 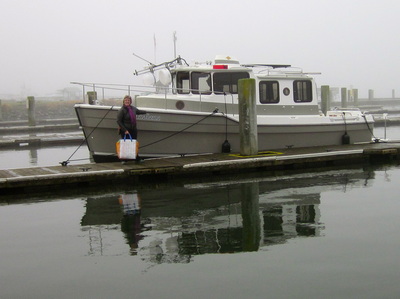 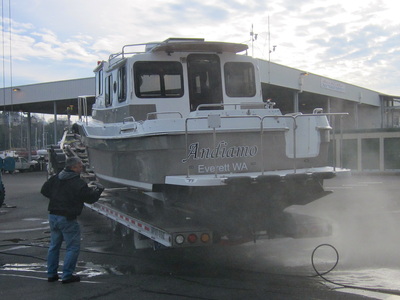 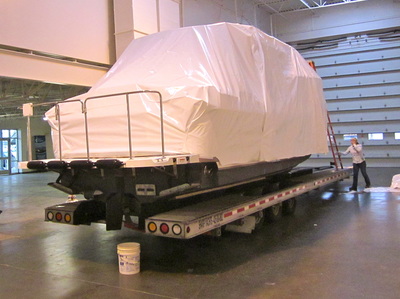 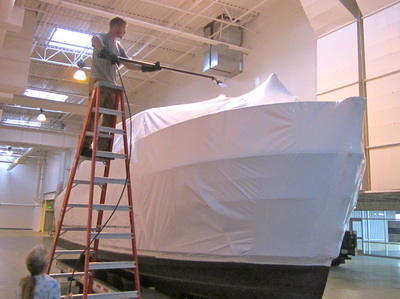 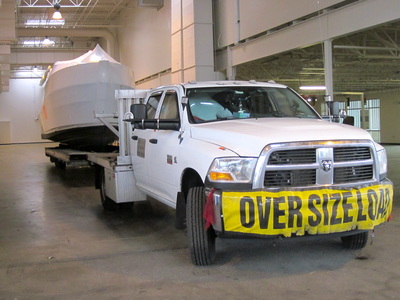 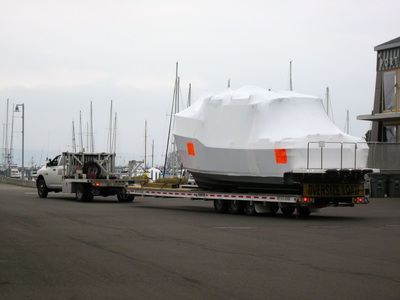 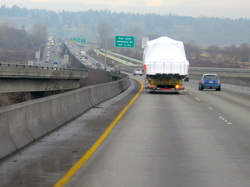